Recap of the 2018 Hurricane Season, Plus a Look at 2019 - StormGeo: Navigate tomorrow – today
Menu 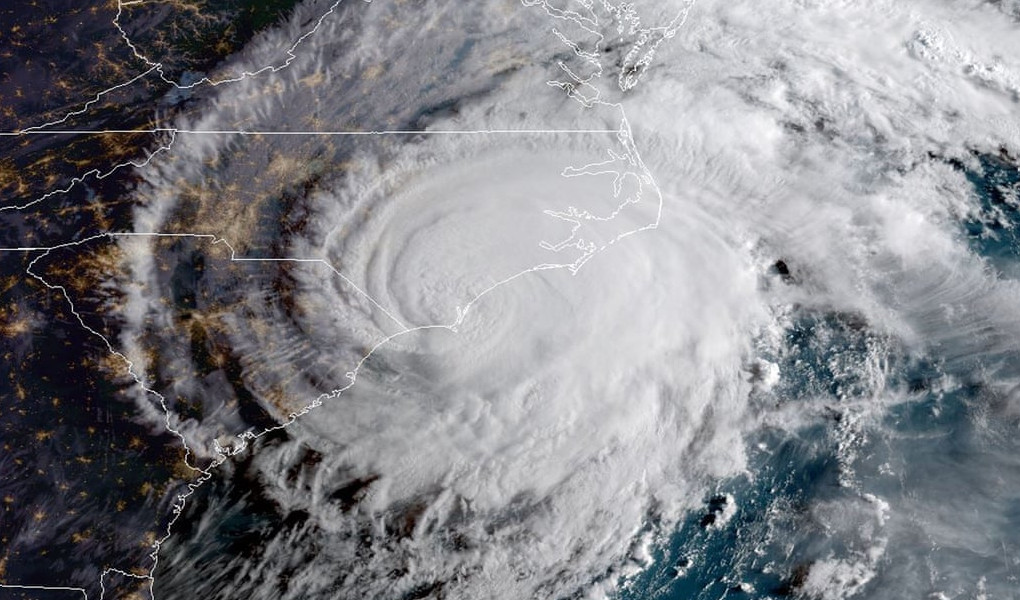 As the six-month Atlantic Hurricane Season comes to an end this week (the official last day is November 30th), we’ve asked our hurricane experts to take a look back at the accuracy of pre-season forecasts, as well as indications for the 2019 season.

Most tropical activity occurs in late August and early September, when a combination of factors, such as warm ocean waters and favorable atmospheric conditions, nurture low-pressure systems that strengthen to become tropical storms. This was certainly the case in 2018. From Hurricane Florence, which formed on August 28, to Tropical Depression Eleven, which formed on September 18, this was the most active period of the Atlantic season with six tropical systems in a three weeks.

Though the Atlantic season officially ends on November 30th, meteorologically it ended several weeks ago. The last named storm in the Atlantic, Hurricane Oscar, dissipated on October 31 without causing any major impacts. Before Oscar, conditions across the Tropical Atlantic, Caribbean and Gulf of Mexico had been showing signs of seasonal changes that discourage storm development.

Meanwhile in the Pacific, tropical storms are continuing to develop. Typhoons Man-yi and Usagi formed just last weekend, with the latter making landfall in Vietnam, bringing heavy rainfall, storm surge and winds. Different areas of the Pacific have varying seasons for storm development, with some areas experiencing storms year-round. Thus, the Pacific tropical storm season may be ongoing past November 30th. 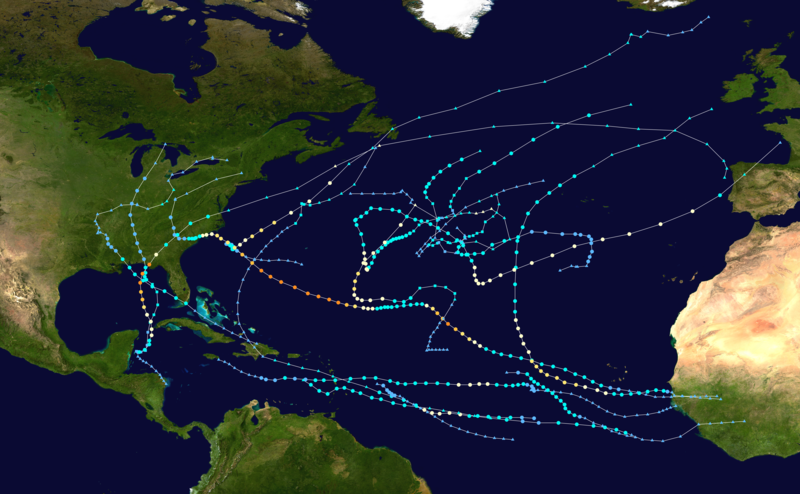 This map shows the tracks of all tropical cyclones for the 2018 Atlantic Hurricane Season. The points show the location of each storm at six-hour intervals. The color represents the storm's maximum sustained wind speeds as classified on the Saffir-Simpson Hurricane Scale, and the shape of the data points represent the type of storm.

Hurricane Florence was the wettest tropical cyclone on record in North and South Carolina, with most damage resulting from freshwater flooding. The city of Wilmington, for example, was cut off entirely from the rest of the mainland by floodwaters. The storm also brought several tornadoes along its path. Many areas received record-breaking rainfall, with more than 30 inches measured in some locations. At least 55 deaths were attributed to the storm and economic losses reached at least $17.9 billion.

Activity picked up again in October, with Hurricane Michael forming on the 7th and strengthening into a category 4 storm over the Gulf of Mexico. Michael made landfall in the Florida Panhandle at peak intensity on October 10 as the third-strongest landfalling hurricane in the U.S. on record. A total of 370,000 people were ordered to evacuate in Florida alone. The storm took the lives of at least 18 people across the southern U.S. and damages in the U.S. are estimated to have exceeded $15 billion.

By mid-October, the first of the early winter cold fronts began pushing across the U.S., bringing cooler air to the coasts from Texas to Maine. This made it clear that the end of Atlantic hurricane season was near.

This map shows the tracks of all tropical cyclones for the 2018 Pacific Hurricane Season. The points show the location of each storm at six-hour intervals. The color represents the storm's maximum sustained wind speeds as classified on the Saffir-Simpson Hurricane Scale, and the shape of the data points represent the type of storm.

The Eastern Pacific Hurricane Season, which starts on May 15th and also officially ends on November 30th, is tied for the fourth-most active season on record. 2018 saw the highest ACE points on record for the region. The most notable hurricane of the season was Hurricane Lane (affecting Hawaii in August as the wettest tropical cyclone on record for the state), followed by Willa (the strongest tropical cyclone in Mexico since 2006).

The Central Pacific Typhoon Season, which is ongoing and nearly year-long, has so far seen 40 systems, from tropical depressions to typhoons. As a comparison, there were 42 systems in 2017, 51 in 2016 and 40 in 2015. The strongest storm was Typhoon Yutu, a Category 5 and the fifth strongest on record to make landfall anywhere in the world. Also notable were typhoons Jebi, Trami and Mangkhut.

How Accurate Were Pre-Season Forecasts?

Pre- and early-season forecasts predicted a near-average to slightly above- average Atlantic Hurricane Season, with StormGeo forecasting 13 named storms, including seven hurricanes and four intense hurricanes. We were specifically concerned for the southeast U.S., noting that storms developing in the western Caribbean Sea could steer north into the Gulf, along with storms near the eastern Caribbean that could track toward the southeast U.S. between Florida and North Carolina.

As tropical meteorologists, we look to Mother Nature for certain “tells” — a reliable one being the strength or weakness of the east Pacific Ocean temperature circulation known as El Niño. A strong El Niño can inhibit tropical development in the Atlantic, due to the increased strength of high-level winds blowing from west to east in tropical latitudes. As 2018 was to be an El Niño year, this was a foundational element of our earliest forecasts.

However, water temperatures remained closer to normal than expected, with only a slight trend toward warming. Without the warming El Niño trend, forecasters edged the storm totals upward slightly as the start of the season drew closer.

2018 has had 15 named Atlantic storms, including eight hurricanes and two intense (Category 3 or higher) hurricanes. Climatologically, 12 named storms with six hurricanes is the average, meaning this year was higher than average and even higher than initially forecast. and, expecting the developing El Niño, StormGeo tropical meteorologists indicated 13 named storms in the March, 2018 forecast.

Looking at early forecasts of areas that were likely to be impacted by Atlantic storms, StormGeo indicated that the southeastern U.S., including coastal Mississippi, the Florida Peninsula and the Carolinas, would bear most of the landfalls. This was indeed the case as every U.S. landfalling storm in 2018 struck the coast in this area (Alberto, Florence, Gordon twice and Michael). Furthermore, StormGeo indicated that the islands of the eastern and northern Caribbean (which were hit hard by storms in 2017) would be less likely to suffer additional damage in 2018. This proved to be true with only two storms making landfall near the eastern Caribbean in weak and dissipating stages (Isaac and Kirk).

Comparing the 2018 Season with Seasons Past

First Look at the 2019 Hurricane Season

Looking ahead, StormGeo has noted some early indications that the Atlantic hurricane season could get off to a slow start or perhaps be slightly below-average in number of developed storms. These indications include the possibility of a lingering El Niño, leading to warmer-than-normal waters in the eastern Pacific. Warm Pacific waters enable thunderstorms, which increase wind shear and inhibit tropical development in the Atlantic.

Though each year’s seasonal forecast is greatly anticipated by coastal residents and businesses, StormGeo would like to emphasize that while the forecast is indeed interesting, any season can have the one storm that heavily impacts lives and businesses. We urge everyone to be prepared for that storm each and every season, without regard to the fluctuations of the seasonal forecast.

*This ranking is considered to be preliminary until finalized by the National Hurricane Season following the official conclusion of the 2018 season.

Ensure Your Hurricane Plan Has the Right Timeline and Triggers

Part 1 of the Hurricane Prep for Business Series. Now is a good time to educate yourself on the correct time to react (based on sound meteorological data) if your business is faced with a hurricane threat.

Planning For Recovery After a Hurricane

Part 2 of the Hurricane Prep for Business Series. According to the U. S. Federal Emergency Management Agency (FEMA), almost 40 percent of small businesses never recover after a disaster. Ask yourself — how will your business continue to function immediately after a storm?

Preparing Your Employees for Hurricanes

Part 3 of the Hurricane Prep for Business Series. In any business, people are your most important asset. As a manager or business owner, it is your responsibility to keep your staff safe, connected, and informed before, during, and after a hurricane.

While a Category 5 hurricane sounds more terrifying than a Category 3, the latter often causes more devastation.  That is to say, category number is not the only or best indication of the damage a hurricane can cause. StormGeo TropicsWatch Manager and hurricane expert, Chris Hebert.